Of spider plants and fungus gnats I sing, so let’s begin with Star Trek. As a child I loved Star Trek and was blind to the propaganda. It was the galactic equivalent of a John Wayne movie. The Klingons were interstellar Red Indians. In one episode, a crew member smuggled a pet aboard the Enterprise. It was a shaggy little thing called a Tribble, about the size of a tennis ball, and with only one trick up its sleeve: it reproduced with a vigour that made rabbits look celibate. By halfway through the show the Enterprise was infested with Tribbles. Another 10 minutes and the crew was in literal danger of drowning in them. How the problem was resolved I can’t remember, but resolved it will have been because American capitalism always came through. Even as a child, I saw the Tribbles as a parable about population explosions. What I didn’t see was their application to houseplants. We had two houseplants when I was growing up: a spider plant and, for one dread season, a ginger beer plant. The ginger beer plant was less a plant than a sludge in a jar and I have no idea how it would be defined biologically, but it came into the house in a Tribble-like way, as a welcome novelty. You just fed it sugar and in response it grew and gave off ginger beer. It grew so much it had to be divided. Soon every warm place in the house had a ginger beer plant in it and every cool place a bottle of ginger beer. It wasn’t until one of these exploded to catastrophic effect in a wardrobe that my mother threw every ginger beer plant into the dustbin to starve, wither and die. But she never managed the same with the spider plants. The mother spider plant lived on top of the fridge and put out long drooping stems on the end of which were baby spider plants. Once they reached a certain size my mother would snip them off and pot them up and try to palm them off on a neighbour or friend. In this she met with diminishing success so gradually the house filled up with baby spider plants which grew and put out long drooping stems at the end of which – well we’re back with the Tribbles again. Fecund stuff, nature. Recently, and perhaps in subconscious reversion to childhood, I acquired a spider plant. The beast has tried the same reproductive trick as it played on my mother but I just snip the babies off and, with ears deafened to their cries, bin them. Of late, however, I have been bothered in the living room by a host of tiny silent flies. These I traced back to the spider plant. With a magnifying glass you could see them hatching from the soil and taking wing. I sprayed the soil with fly spray but still they came. “Fungus gnats,” said Carol at the local garden centre, and she sold me a pack of sticky yellow sticks. You plunge them into the offending pot and the flies are attracted to them and get stuck and die, and thus the cycle of their reproductive lives is broken and in this house I remain the temporarily dominant species. Amen. 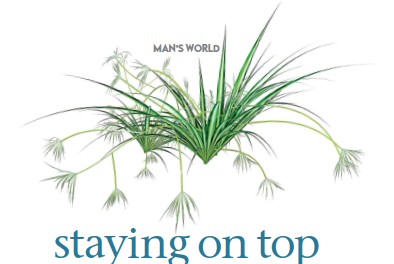