My first visit to the mountains of northwest Yunnan to see rhododendrons growing in the wild was a spirited adventure. We were taken by drivers up rough roads which ascended to about 3000m. After that we walked slowly upwards, breathing deeply but challenged by thin air. All across the mountains were altitudinal ribbons of colour of different species of rhododendrons. Around and underneath grew primula, rodgersia, irises, astilbe and other flowers in profusion. I visited again 20 years on. Yunnan, a “wild west” province, had been opened up for Chinese domestic tourism. There were level, paved paths in the mountains which city girls negotiated in high-heeled shoes. At another site, a gondola of glass bubbles swept us up to float over a vast kaleidoscope of colour – rhododendrons in flower. There were stops on the way for shopping. The first shop sold weapons – not guns but lethal-looking knives and machetes. The second shop stocked all manner of dried fungus as well as dried frogs and toads. The third shop had oxygen bottles. We were each equipped with one of these and let out to walk. I didn’t venture far; the air was thin, and I was worried about getting lost. A heavy fog had come down. The gondola had disappeared. The ground was stony. Plants were sparse at this altitude, far above where rhododendrons could survive. But I stumbled upon a fabled blue poppy: Meconopsis horridula, called the horrid blue poppy because it has prickles. Its ethereal blue flower floated in the mists in this cold and inhospitable landscape. I wonder when we can travel again. Rhododendrons in the garden are but a distillation of these great wild places. I prefer to grow the species: plants as found in the wild, rather than hybrids, crosses between them, which are man-made plants. Rhododendron nuttallii has whopping great flowers, white with a golden throat, like lilies but on a loose and straggly bush. In nature, this rhododendron is usually an epiphyte, growing in forks of trees, or on steep banks, rooting into the leafy litter. It requires excellent drainage in the garden. At Larnach Castle, we have R. nuttallii planted on upturned tree roots in our stumpery. Twenty five years ago, I purchased some large-leafed rhododendrons grown from wild-collected seed. One of them, for which I lost the name, didn’t bother to flower until recently. Its flowering was then quite sensational; its reluctance was forgiven. After a couple of year’s rest, it is going to flower again this spring. It may be R. coriaceum, a rare rhododendron from northwest Yunnan. ‘Sir Charles Lemon’ is a hybrid, a cross occurring in the wild between Rhododendron. arboreum ssp. cinnamomeum and R. campanulatum. Seed was collected by Sir Joseph Hooker in northern India in the mid-19th century. This seed was grown by Sir Charles Lemon in his Cornwall garden; 80 years later, cuttings were finally taken and distributed worldwide. 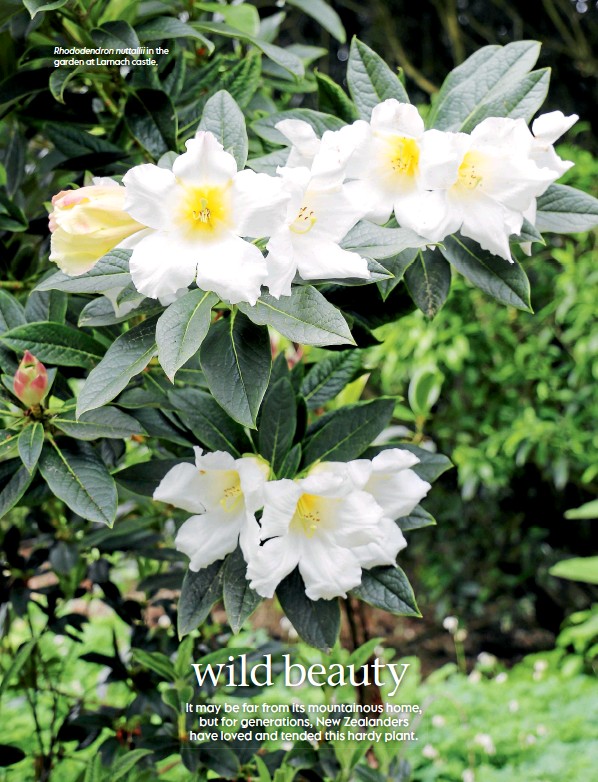