If this tree could talk

Late last summer I met a friend at Porirua Railway Station and we caught a bus to the top of Cannons Creek. With daypacks on our backs, we walked through Bothamley Park down the hill to gain some modest exercise before our lunch at the Indian restaurant in the Mungavin homestead off the motorway. The ochre-coloured homestead is familiar to all those who whiz along the motorway past the turnoff to Porirua East, and the Mungavin name is attached to a local medical centre, street, park, even the interchange itself. But how many have noticed the stately golden macrocarpa, once part of the homestead’s splendid garden? Sheep farmer Peter Mungavin was born on the ship from Ireland to New Zealand in 1853 and later inherited his father’s 365 acres of land to the east of the railway line at Porirua, what is now Porirua East north to Cannons Creek. In 1915 he had a homestead built for his family and in 1916 commissioned landscape designer Alfred Buxton to create a garden to complement the homestead. The extent and ambition of the 1.4-hectare garden design can be seen when you compare the cost of creating the garden (£1000) to that of building the homestead (£1300). Alfred Buxton not only designed the garden but also implemented the design, providing the workmen and probably the plants from his Christchurch nursery. His landscaping business in Canterbury had been operating for many years before he set up an office in Masterton in 1916, and the Mungavin garden was one of the first, probably the first, he designed in the North Island. The gardens included a tennis court (roughly where the centre line of the motorway is now), an artificial lake fed by the Porirua Stream, a large orchard, exotic specimen trees and formal gardens. Native trees were planted on exposed banks and as an understorey to the exotic trees. Eating my curry in the homestead’s dining room, I tried to imagine the garden as it once was – the family sitting on the verandahs and looking out over the garden to the farm below (what is now the railway station and carparks); the children and grandchildren chasing each other around the house, rolling on the grass, playing a match on the tennis court and perhaps croquet on the lawn. As the garden grew and developed, there would have been trees to climb, fruit to pick and an enticing garden for them to explore. The lake with its bridges, islands and stands of trees must have been an exciting adventure playground for the children. I could see Mary Mungavin, Patrick’s wife, strolling the grounds with her friends, admiring the formal garden beds, perhaps picking some flowers for the house, maybe even pulling out the odd weed as she went, as we all do. Unlike farmers’ wives some 30 years later, she would not have been the primary gardener. She would have had help – designated gardeners or at least farm hands who could garden under supervision. Near the homestead is a magnificent golden macrocarpa (Cupressus macrocarpa ‘Aurea’), planted as part of the original plan. The tree can be seen in front of the house in an early photograph of the Mungavin property, its favoured status shown by its placement near the house so all who came could see and admire it. The estate didn’t stay intact for long. In 1928, the government took a chunk of farmland to construct the railway line. In the 1940s, a huge part of the farm was taken for state housing. Then, in the 1950s, the development of the motorway finally signalled the end of the garden as it was consistently nibbled at until virtually all of it was gone. In 1987, the homestead was moved 38m to the east to create a slip road to the Mungavin Interchange so the golden macrocarpa, with that glorious shot of gold, is no longer immediately in its favoured place in front of the house. However, it does still stand, where it was placed by Alfred Buxton more than 100 years ago – a remnant of what was one of the most significant gardens in the Wellington area in the early part of the 20th century. The golden macrocarpa, as much as the homestead, is a part of the area’s heritage and has earned its preservation status. Planting it really was an investment in the future. 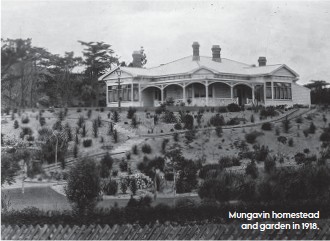 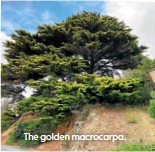 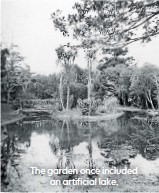