TREE OF THE MONTH

Rangiora in the wild This bushy tree or shrub is endemic to New Zealand, and is common all through the North Island. It’s also widely seen in the northern portion of the South Island, and you’ll find it has naturalised on the Banks and Otago Peninsulas, and even as far afield as Stewart Island. Since rangiora is a pioneer species that thrives in dappled exposure, you can find shrubs and seedlings scattered along tracks of most lowland, broadleaf forests. The Waitākere Ranges in Auckland boast frequent sightings of rangiora, as does Zealandia in Wellington. Rangiora is an important species for native regeneration and is often used as a pioneer before interplanting with other, more delicate species. Rangiora in the home garden This would be an interesting plant in a domestic setting, with the potential to become a talking point on those lovely summer garden parties. In spring, it is covered in an abundance of giant, umbrella-shaped composite flowers that are creamcoloured and fragrant. Though the umbels are extremely showy, the flowers themselves are tiny, up to only 5mm in diameter. They start popping up in early spring. Rangiora has the largest leaves of any tree daisy species which are characteristically leathery with colour ranging from green to lime-green with dark venations on the top, and a tawny, soft and white to cream-coloured underside. At maturity, the shrub can be 5-7m in height, and can seem sparsely filled when viewed in the wild – it is generally an understorey and mid-storey species. In the open though, rangiora tends to take on a more compact and dense appearance, making it more pleasing and arguably appropriate for many home garden settings or backyards. Best way to propagate Propagating rangiora is extremely easy, either from fresh seed, or from semi-hardwood or hardwood cuttings. The tree may be short-lived, so plan to propagate every 5-10 years, in order to have trees that look their very best. Care & maintenance Rangiora requires hard pruning after flowering to maintain a compact shrub shape. If left unpruned, it may grow to its natural height in the environment – up to 7m tall – and then seem too big in a smaller space. Also, the branches are often brittle if left unpruned and become easily damaged in high winds, so best to keep it compact. Is rangiora used in rongoā? Rangi means sky and ora is health or vitality. Obviously, this plant is a symbol of health and vitality for Māori. The leaves were traditionally used for poultices. They are said to have an antiseptic quality and were used to cover sores and wounds, though they are toxic if eaten by humans or stock. The leaves were also used to wrap cakes made from hīnau (Elaeocarpus dentatus) berry meal while cooked in hāngi, and were also useful for lining baskets when collecting fine food material such as raupō pollen for a flour substitute. Fun fact Rangiora is a sensory treat for kids, since the soft, tawny underside of its leaves feels nice to touch. Its English name, bushman’s toilet paper, never ceases to draw a giggle from the youngest of the family either (at 25cm long and 20cm wide, it is said to make an ideal substitute for toilet paper, hence its other name, bushman’s friend!). My children and I have also had great times drawing on the creamy underside of the large leaves, and posting our messages to neighbours or family members. 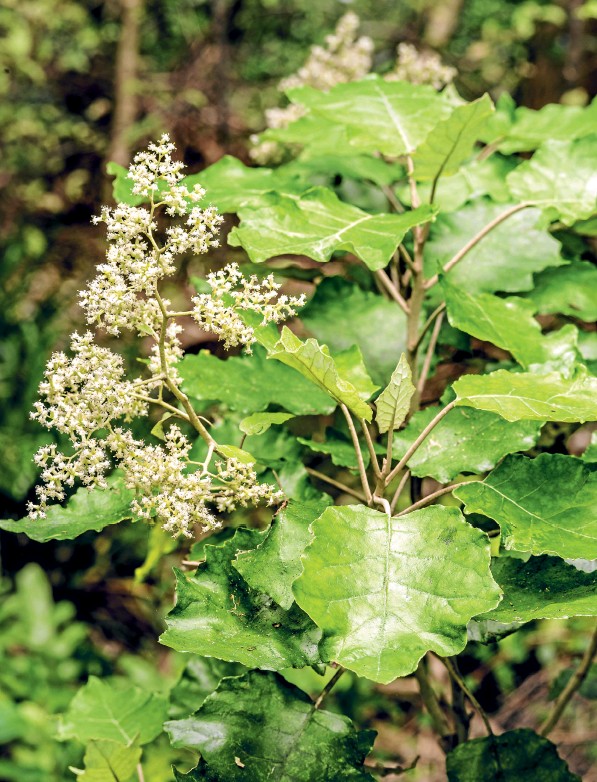