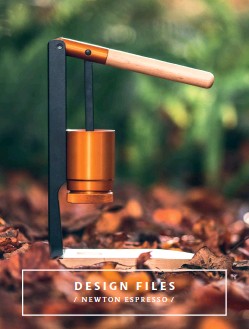 STUDY IS OFTEN fuelled by caffeine, but few students go as far as designing their own coffee maker to get their fix. But that’s exactly what Hayden Maunsell did, as he tried to find an inexpensive means to fuel himself through the end of his masters degree in design. Enlisting the help of engineer and friend Alan Neilson, Hayden designed a minimalist and entirely manual espresso machine. “There’s something nice about creating yourself, being able to go through the process of making coffee and you’re involved in every step along the way,” he says. The machine, which comes in orange and black or white and black, calls for the user to boil the water, then warm and pack the cylinder with coffee before pulling each shot. The goal was to create something that was durable and zero-waste, Hayden says. The product is relatively small, wall-mountable, and was designed with current property trends – like the tiny house movement – in mind, Hayden says. “We also didn’t want it to be something that you put in your cupboard.” Everything is made as close to their Hawke’s Bay workshop as possible, too, which was valuable for tweaking designs slightly in the early days. “You wouldn’t get that if you were doing bulk products. It’s about keeping that product local.” To get off the ground, the pair pre-sold their machines through a Kickstarter fundraising campaign that ran for a month from late September. Within hours of opening, the pair’s $10,000 target figure was reached thanks to coffee lovers’ desire to pull their own morning joe. They ended their campaign just short of $50,000. While their values are local, the pair’s design has captivated coffee drinkers worldwide, with Kickstarter backers from as far away as Russia and Kuwait, and German and Japanese news organisations picking up the story. It wasn’t just coffee lovers who fell for the design either, with the machine taking out Home magazine’s 2017 Design Awards, as well as picking up a silver and bronze at the Designers Institute of New Zealand Best Design Awards. It’s now available, priced at $580, through the Newton Espresso website, with new orders expected to be filled in February 2018. /