Thomas Heaton meets an artist who’s hand-printing textiles for the home AS KATIE SMITH DRAWS the wooden squeegee across the boxed mesh, the ink seeps through the gaps, transposed onto the fabric below. Smith screenprints the old-fashioned way, stamping her designs onto tea towels, cushions, napkins and cork place mats for her Auckland business Smitten Design. Smith has been doing this for a long time, starting with screens she found in her signwriter father’s garage at 16 years old. With those screens she printed on her own clothes, played around with fabrics hoarded from op shops and sold some of her work at local cafes. She later studied textiles at Otago Polytechnic, then received an MA in textile art at Goldsmiths, University of London. Smith finds inspiration in urbanindustrial settings and the greenery around her west Auckland studio and home, and her stripes, lines, spots and tartan-style designs draw on that inspiration. Smith says her twig design is influenced by both the natural environment and the urban setting, appearing like an imperfect zebra crossing on the fabric. Every one of her designs is created to be repeatable, so one day they can be sold by the metre. Nostalgia also inspires her, says Smith. Her mother studied fashion in the 60s, and was no doubt a big influence. “So there’s that retro part as well – all those things are coexisting and fusing together,” she says. “It all seems to be a wild mash-up. Subconsciously it all kind of bubbles up.” Smith’s passion for textiles comes from a love for fashion, art and design. She’s worked in each of those industries, in the fields of sales and project management. “As far as Smitten goes, it’s been a little bit on-again, off-again due to having children and working full-time and parttime. I’ve just only recently given it my all,” she says. “All these experiences have really nurtured my practice. The thing about textiles is its ability to nurture a crossover between all these different fields – fashion and craft and bespoke work.” Smith uses water-based solvent-free inks to create her own images, employing screens made with films treated with light-sensitive emulsions before being exposed to a 400-watt light. “You’re pretty much then left with a stencil.” Then it’s a case of drawing the colours over natural fabrics. The work is therapeutic, given the repetitive motions and the creative process of design, she says. “You need to find your own voice in the cloth. To me that’s colour and texture, I’m not doing tūī or plant life. I plan to bring that in, but I am keeping it simple. I hate things being perfect, because life isn’t perfect.” Some processes are “archaic” compared to what is done elsewhere, she says. “I’m quite old school. It’s very rewarding, and it’s very different to a commercial printer. “Having worked for a commercial textile wholesaler, the fabric used to be bought in bulk and there was so much wastage. I just wanted to be able to print my designs in limited editions and short runs so people who bought from me were also buying a little bit of me.” Corban runs classes for children and adults at Corban Estate Art Centre, as well as through Whitecliffe School of Arts and Design, and there’s a waiting list to get in. She hopes to expand her teaching too, she says. “Everyone does such different work. That’s quite rewarding, with community education, because you have people from such different backgrounds and experiences. I think ‘yay, I’m breeding all these people who are going to keep the craft of screen printing alive’. “The process of being hands-on and getting ink on your fingers, and being able to be really spontaneous, is so important.” 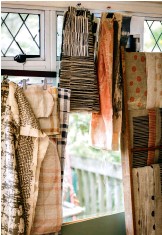 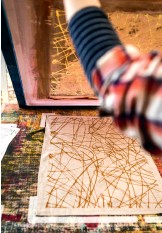 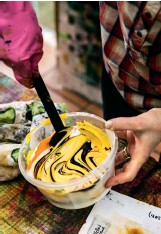