This is a unique dish from Catalunya (Catalonia) in north-eastern Spain that traditionally uses salt cod served raw. It needs to be started several days in advance. It works perfectly as a summer salad and is a refreshing accompaniment to festive barbecues. 350g (about 2) monkfish fillets 600g salt 1 Lebanese cucumber 1 green capsicum 1 honeydew melon 2 green heirloom tomatoes 1 green chilli (more or less depending on your personal heat threshold) 60g thinly sliced brown onion (about ½ small onion) 25ml extra virgin olive oil plus a little extra to toss with the vegetables 20ml sherry vinegar herbs and/or samphire to serve Clean and trim the monkfish fillets. Put a third of the salt in a container and place the monkfish fillets on top, flat and side by side. Cover with the remaining salt and cover with plastic wrap. Refrigerate for 2 days. After two days, remove from the salt and rinse off any remaining salt. Transfer the fish to a container, fill with 5 litres of water and let sit for 24-48 hours. Remove the monkfish from the water and pat dry. Traditionally the fish is then shredded by hand, or alternatively you could cut it into thin strips. Peel the Lebanese cucumber, cut into quarters lengthwise and deseed. Cut into 1cm cubes. Blow torch or roast the green capsicum until soft and blackened. Rub the blackened skin off and cut 4 cheeks from the capsicum. Remove the white membrane and cut the capsicum cheeks into 1cm cubes. Peel and deseed the honeydew melon and cut into 1cm cubes. Cut the green tomatoes into 1cm cubes. Slice the green chilli thinly. Now put the shredded monkfish and thinly sliced onion into a mixing bowl. Add the extra virgin oil and sherry vinegar and mix. Transfer to a suitable plate, platter or bowl. Toss the cucumber, capsicum, melon and tomato with a little olive oil, season and arrange nicely over the fish to create a vibrant green design. Garnish with fresh herbs and/ or samphire (a sea vegetable). 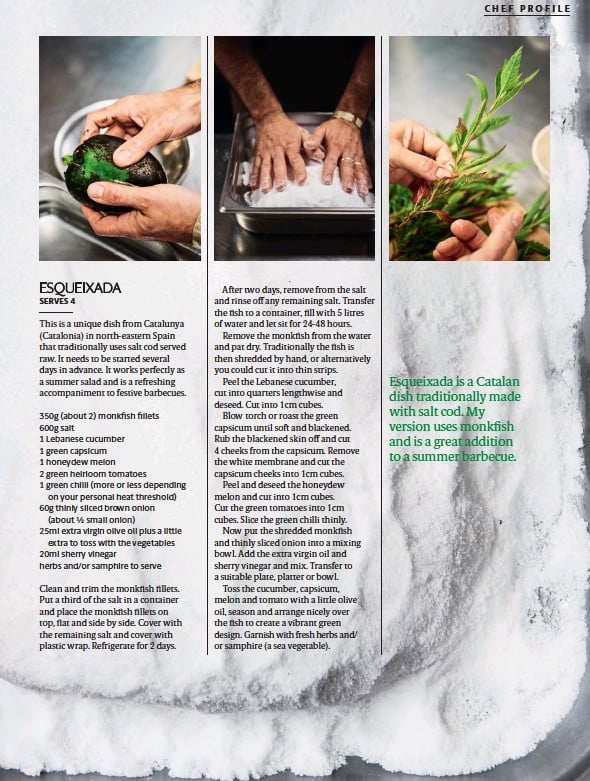