Tractors may represent grass-roots industry, but they’re also the perfect perch for mindfulness. Farmer Bob Berry was atop his mechanical steed when he had a lightbulb moment – and its focus was curds, not herds. So began the long, slow story of the White 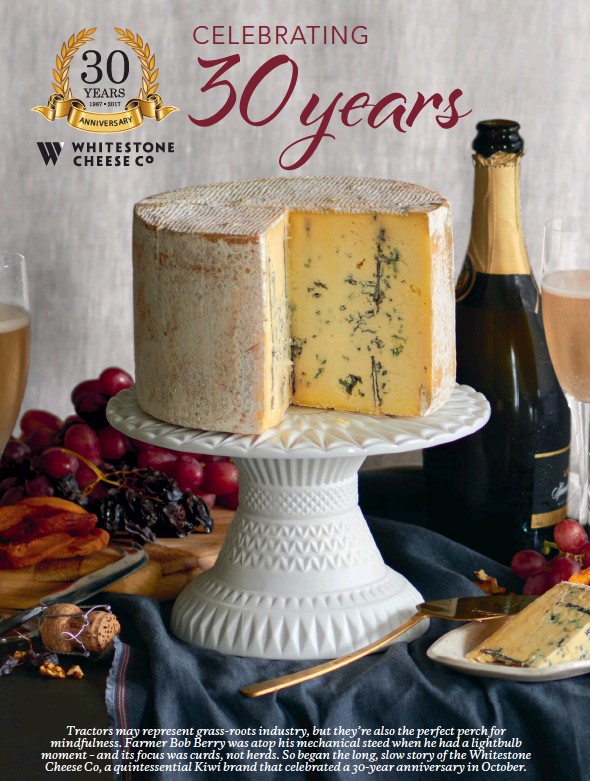 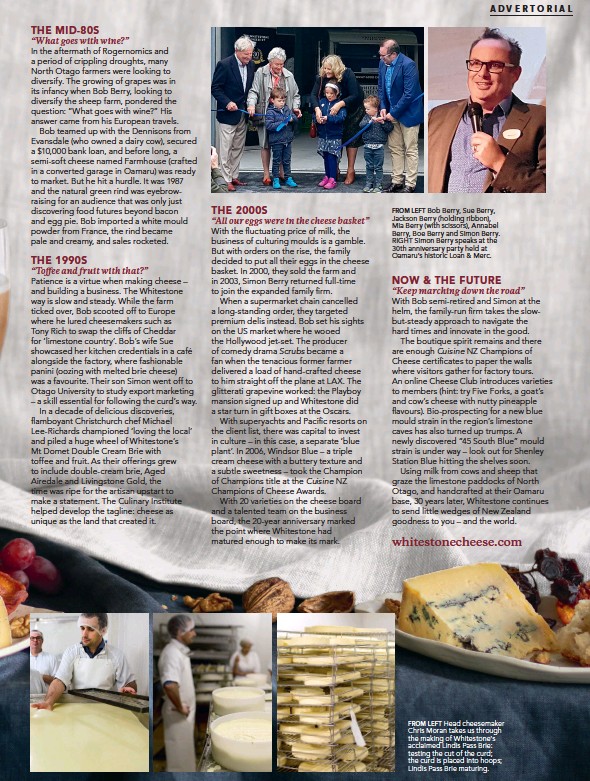 THE MID-80S “What goes with wine?” In the aftermath of Rogernomics and a period of crippling droughts, many North Otago farmers were looking to diversify. The growing of grapes was in its infancy when Bob Berry, looking to diversify the sheep farm, pondered the question: “What goes with wine?” His answer came from his European travels. Bob teamed up with the Dennisons from Evansdale (who owned a dairy cow), secured a $10,000 bank loan, and before long, a semi-soft cheese named Farmhouse (crafted in a converted garage in Oamaru) was ready to market. But he hit a hurdle. It was 1987 and the natural green rind was eyebrowraising for an audience that was only just discovering food futures beyond bacon and egg pie. Bob imported a white mould powder from France, the rind became pale and creamy, and sales rocketed. THE 1990S “Toffee and fruit with that?” Patience is a virtue when making cheese – and building a business. The Whitestone way is slow and steady. While the farm ticked over, Bob scooted off to Europe where he lured cheesemakers such as Tony Rich to swap the cliffs of Cheddar for ‘limestone country’. Bob’s wife Sue showcased her kitchen credentials in a café alongside the factory, where fashionable panini (oozing with melted brie cheese) was a favourite. Their son Simon went off to Otago University to study export marketing – a skill essential for following the curd’s way. In a decade of delicious discoveries, flamboyant Christchurch chef Michael Lee-Richards championed ‘loving the local’ and piled a huge wheel of Whitestone’s Mt Domet Double Cream Brie with toffee and fruit. As their offerings grew to include double-cream brie, Aged Airedale and Livingstone Gold, the time was ripe for the artisan upstart to make a statement. The Culinary Institute helped develop the tagline: cheese as unique as the land that created it. THE 2000S “All our eggs were in the cheese basket” With the fluctuating price of milk, the business of culturing moulds is a gamble. But with orders on the rise, the family decided to put all their eggs in the cheese basket. In 2000, they sold the farm and in 2003, Simon Berry returned full-time to join the expanded family firm. When a supermarket chain cancelled a long-standing order, they targeted premium delis instead. Bob set his sights on the US market where he wooed the Hollywood jet-set. The producer of comedy drama Scrubs became a fan when the tenacious former farmer delivered a load of hand-crafted cheese to him straight off the plane at LAX. The glitterati grapevine worked: the Playboy mansion signed up and Whitestone did a star turn in gift boxes at the Oscars. With superyachts and Pacific resorts on the client list, there was capital to invest in culture – in this case, a separate ‘blue plant’. In 2006, Windsor Blue – a triple cream cheese with a buttery texture and a subtle sweetness – took the Champion of Champions title at the Cuisine NZ Champions of Cheese Awards. With 20 varieties on the cheese board and a talented team on the business board, the 20-year anniversary marked the point where Whitestone had matured enough to make its mark. NOW & THE FUTURE “Keep marching down the road” With Bob semi-retired and Simon at the helm, the family-run firm takes the slowbut-steady approach to navigate the hard times and innovate in the good. The boutique spirit remains and there are enough Cuisine NZ Champions of Cheese certificates to paper the walls where visitors gather for factory tours. An online Cheese Club introduces varieties to members (hint: try Five Forks, a goat’s and cow’s cheese with nutty pineapple flavours). Bio-prospecting for a new blue mould strain in the region’s limestone caves has also turned up trumps. A newly discovered “45 South Blue” mould strain is under way – look out for Shenley Station Blue hitting the shelves soon. Using milk from cows and sheep that graze the limestone paddocks of North Otago, and handcrafted at their Oamaru base, 30 years later, Whitestone continues to send little wedges of New Zealand goodness to you – and the world.