A RECIPE FOR LIFE

KELLI BRETT reflects on honouring the legacy of her food-loving mum. 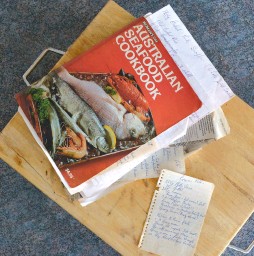 Kelli Brett reflects on her food-loving mother’s legacy THIS TIME LAST YEAR, as we put our January issue for 2017 to bed, I had not long returned from my mum’s funeral in Western Australia. It was, understandably, a difficult time. My mind was filled with a desire to remember Pat and keep her alive as that woman I had fought with and loved and admired. When she was strong and determined, thinking all day every day about food, what she might cook next and who she might share it with. When she was my best friend. I wanted to block the memories of my last visits with mum. At her home in the remote town of Shark Bay, where her fridge that I’d filled with pâtés, terrines, olives, cheese (all of her favourites) was barely opened. The shocking realisation that a woman who had been defined by food had forgotten how much she loved it. My last moments with her at a nursing home, having to face the unavoidable fact that her still wicked wink and wry smile could be for anyone. She had forgotten that she loved me, she no longer knew who I was. I had lost the friend who had always been in my corner. Trying to swallow my unreasonable anger at her for all of the smoking and drinking, for not taking better care of herself. For not being able to share my joy and pride in being the editor of Cuisine. For being unable to know what her lifetime and skills and creativity had taught me. As the memories came flooding back, I had to come to terms with the fact that ours was not the traditional version of the mother-daughter cooking relationship. Mum never taught me to cook. There are no memories of matching aprons or of baking or creating meals together. The cooking was always hers. Instead what Pat taught me was determination. That from adversity comes opportunity, that to share food that you have created is to show love and that if you shred a spring onion and put it in ice water, it will become magical curls of green. Her dinner parties in the 80s and 90s were legendary. I grew up while watching her go from home cook to takeaway food shop owner, to caterer, to gourmet food store owner, to restaurateur and then finally, return to her own mum’s hometown to run a little cafe on the waterfront. I was watching my mum still lugging giant pots of soup or stock around the kitchen well into her 70s. Food and the sharing of it was her life. As her dementia increased and before we had realised it was there, Mum started to ask what we would like to have from her belongings. Of course the answer was always, “Nothing, you are not going anywhere”, but deep down inside I felt that her Golden Wattle Cookery Book (that had seen her through housewife to restaurant owner) and her prawn pâté recipe (this pâté had caused Saturday morning queues down the street outside Pat’s Gourmet Food Store) should be mine. When she passed I got neither. I thought they were lost. Just after her funeral, I received an email from New Zealand cook and caterer Grant Allen, asking if I’d consider contributing recipes to a book he was working on with Christian Kasper called My Mother’s Kitchen. Some of New Zealand’s best chefs, bakers and foodies were going to share their mothers’ special recipes. I was torn between the desire to put Mum’s recipes in print and the fact that I didn’t actually have them. I had to recreate them from memory. It weighed heavily on me that despite my great passion for food and history, storytelling and curation, I had failed to preserve my own mum’s original recipes. A little piece of the link would always be missing. Much wine and many tears were essential ingredients during those late-night recipe development sessions. In November this year, I received from a cousin in Australia a tattered, sauce-splattered copy of The Golden Wattle Cookery Book covered in handwritten notes in Mum’s elegant spidery style. That same week my sister delivered Mum’s dog-eared Woman’s Day Australian Seafood Cookbook. Inside were recipe cut-outs collected as inspiration for many of Mum’s dishes, handwritten recipes, plus autographed photocopies of the originals – these used to be shared with restaurant customers who asked for her recipe secrets all those years ago. And the much-prized recipe for Pat’s prawn pâté. A lifetime of cooking and sharing and love, through food. Of course, much wine and many tears followed. I’m not the world’s greatest cook, but the mulberry never falls far from the tree. Hand down your recipes and preserve the love...