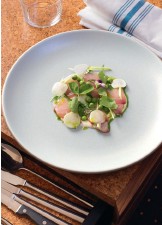 15/20 89 Aro St, Aro Valley 04 385 4555, rita.co.nz Dinner Tues-Sat Three-course set menu $65 RECENTLY I DINED at an award-winning restaurant where the chef is much-feted for his creativity. We nibbled through about 20 courses and I felt like I spent each one referring back to the menu so I could work out what I was eating. It was interesting and innovative, but all a bit too clever for my liking. Rita, the newly opened eveningsonly restaurant in Wellington’s Aro Valley, is the antithesis of that kind of experience. Brought into life by “the folks from Nikau”, as the website quaintly puts it, Rita somehow manages to be elegant and yet completely unstuffy all at once. Of course, that’s thanks to those Nikau folks, namely Kelda Hains and Matt Hawkes in the kitchen and Paul Schrader out the front. It’s a bit like going to a friend’s place for dinner, only to find that they have become a marvellous whiz in the kitchen, have an enviable wine list and nifty tables with a hidden drawer for cutlery. Sure, you might have to put up with some braying lawyers at a nearby table, but no one’s perfect. Much has been written already about the restaurant’s diminutive size – once a humble worker’s cottage, it seats about 30 – and its stylish interior. The fact that it holds two sittings (5.30pm and 7.30pm) is also refreshingly different. But after extensive surveying on my part (which is to say, I asked everyone I knew who had been there), it turns out that the thing people love most about Rita is that it offers a set menu. “Oh my god,” sighed a friend when I questioned her about it. “I love it that you don’t have to make any decisions when you go there.” In a world filled with choices, it turns out that people love being told when to turn up and what to eat. As a fully paid-up member of this club, I can only concur, but freer spirits will be relieved to learn that you do have a little bit of freedom at Rita. The three-course menu has various add-ons, depending on the whim of the kitchen (spoiler: they are hard to resist). On the night of our visit we were offered a few little add-ons to choose from – a crispy farinata topped with caramelised onions and Basque Ossau-Iraty cheese, a French potato salad featuring lovage and waxy potatoes in two-dollar coin slices, and rye pasta with salmon caviar (“Kelda calls it lox and bagels in pasta form,” Paul explained). That aside, all you have to do is decide on what to drink, but since the wine list is as bijou as the rest of the place, this is hardly onerous. We started with a glass of Maude fizz, undulating softly in old-school Champagne glasses. A little dish of baby asparagus with pistachio-dusted Drunken Nanny goat cheese was set in front of us, swiftly followed by the aforementioned farinata. The official first course – scribbled on the docket on the table as ‘Pork’ – turned out to be a deceptively simple salad of crispy pork belly with radishes and fresh herbs, dressed with tangelo juice. A pillowy slab of bread appeared to mop up the juices. The second course, a brick of hāpuku bathing in a pool of fresh pea puree and fish stock, was beautifully put together. I could have foregone the fish and just lapped up the sauce from the plate like a cat (as relaxed as things are here, I stopped short of doing so). The new potato salad wasn’t necessary, but it was delicious. The last course was a rewrite of the classic Kiwi custard square, with a pool of tart-sweet blood orange jelly that tempered the richness of its pleasingly pale and wobbly custard middle, crisp pastry shell and a glossy chocolate top. Set menu arrangements can often feel forced, or overly complicated, but there are no duds here. They’ve obviously put a lot of thought into the menus at Rita, but it’s done with a light touch. There’s a real sense that this is what the owners themselves would like to be sitting down to eat and drink, rather than what trends dictate. Weirdly, this kind of common-sense approach seems almost revolutionary, but perhaps there’s a chance that it will catch on elsewhere. In the meantime, Rita is lovely. Go and see for yourself. LUCY CORRY