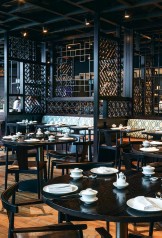 14/20 269 Parnell Rd, Parnell 09 373 3883, gerome.nz Lunch & dinner 7 days Larger dishes $20-$35 GEROME OPENED IN April in the site formerly home to 90s Parnell favourite Iguacu, boasting a slick new Paul Izzard-designed fit-out and an enticing menu of modern Greek flavours. The large A-frame space has been cleverly designed, with plenty of glass, dark marble, velvet and leather giving a sense of sophistication, and a mix of comfy cushioned booth seating, larger tables and settle-in-for-the-night high-backed bar stools. We nabbed a cosy corner spot in the upstairs section, admiring the impressive bar and large charcoal grill on display in the open kitchen as we ascended the stairs. According to the Gerome website, the menu of head chef James Kenny – who has worked under Gordon Ramsay in London and more recently was at the helm at Auckland’s Cornwall Park Bistro – is loosely based on flavours from the Greek Islands, where he’s also spent some time. Designed to share, it’s divided into smaller dishes, larger dishes, sides and desserts. There are a few Greek terms that we needed help to decipher, and our waitress handled our queries with aplomb. The drinks list kicks off with a neat little selection of G&Ts, cocktails both short and tall, and martinis, most of which have a vague Greek air. The wine selection is decent if a little on the safe side – it would have been nice to see a few Greek wines represented, though ouzo and metaxa are there waving the Hellenic flag. The beer offerings are all from the Lion stable, but I’m not one to complain when Panhead Supercharger is on tap. We started with a few smaller dishes, all of which were in fact pretty generous in the size department. The lakerda – a dish of raw trevally, avocado, chilli, cucumber and bergamot – was lovely and fresh, but the acidity was ramped up a little too much for it to be entirely successful, overwhelming the taste of the fish. Burnt eggplant with pomegranate, sesame seeds, almond sauce and young herbs was great – it was well-seasoned and all the flavours complemented each other nicely. The texture of the almond sauce was perhaps a tad on the grainy side, but this didn’t detract too much from a very nice dish. My carnivorous dining companion pronounced the skewers of lamb heart offally good (sorry) – rosy pink and nicely seasoned. A spoon to get properly at the accompanying capsicum skordalia would’ve been nice, as it tended to slide off the tines of the wide fork provided. While these arrived promptly after we ordered, there was a fairly lengthy wait for our larger dishes – no doubt due to a couple of larger tables close by. No matter, we had generous pours of Greywacke pinot gris and The King’s Bastard chard to keep us going. We opted for the roasted cauliflower with capers, pomegranate and sour cream vinaigrette; served “steak” style, it was a tasty version of what’s fast becoming a modern vego classic. My meat-eating companion stuck with sheep, this time a lamb shoulder accompanied by watermelon and a tangy tahini yoghurt. The shoulder was very dark and veering dangerously towards the dry side, but the rich, caramelly Marmite flavour of those borderlineburnt bits was enjoyed, whether or not they were intentional. The watermelon was a great foil, albeit not particularly seasonal for early November, and the generous addition of pine nuts and pomegranate arils was a nice touch. Dessert was barely needed but I’m not one to pass up on a doughnut opportunity, and the loukoumades didn’t disappoint – deliciously warm and doughy, they were joined by a scoop of excellent coffee ice cream, with hazelnuts and a housemade take on Nutella rounding out a very nice dessert. In a similar vein, I feel it would be criminal to pass up on a custard slice in any form, so the galaktoboureko with saffron syrup and liquorice ice cream was a no-brainer. The flavour of the custardy filo-bound pie was good, but it was overwhelmingly large and the custard a little on the dense side. The liquorice ice cream was delicious but we weren’t convinced it was the perfect partner for the galaktoboureko, the intense flavour drowning out anything much else. Gerome is a great addition to the Parnell dining strip. It’s not slavishly authentic to the Greek theme but nor is it trying to be, and for the most part it serves up a pretty wellrounded package of flavoursome food, slick service and good vibes in a stylish but welcoming space. ALICE NEVILLE