THOMAS HEATON discovers a treasure trove of Hellenic delicacies on the North Shore. 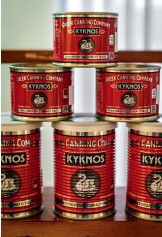 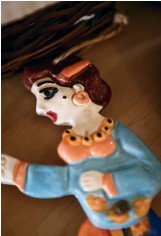 Thomas Heaton visits a treasure trove of Hellenic delicacies in Auckland TUCKED AT THE END of a cul-de-sac in Browns Bay on Auckland’s North Shore sits a wee Mediterranean oasis. It looks like any other warehouse from the outside; nothing screams “Greece” until you get inside, when the smell of pastries, brought out in batches throughout the day, hits you. There’s warm, crispy spanakopita, tiropita and pin-wheeled baklava sitting next to the till, while jars of olives, olive oils, dried fruits, herbs, spices and other typical Greek foods line the walls. This is Little Greece, the retail outlet of Taste Greece, a company that imports Hellenic products to New Zealand. Giannis Montes started the business, which supplies eateries countrywide through various distributors, in 2011 with his brother Christos, after they emigrated to New Zealand from Athens. As their mother hails from Te Kuiti, the brothers had visited the country several times, and both felt it would be a good place to raise their families. Food was less familiar to the brothers, as both had worked in the Greek film business before the move. They wanted to try something different in New Zealand, and saw a need for good olive products. “New Zealand oils are good – there are New Zealand producers that do a good job,” says Giannis Montes. “But it’s so expensive sometimes. It’s not oil for an average consumer that you can use everyday.” You may have tried the Iliada olive oil Taste Greece imports, given bottles end up in restaurants like The French Café and Gerome in Auckland, and Hellenic restaurant Oikos in Wellington. Taste Greece also distributes the oil through specialty supermarkets like Farro Fresh. “I even had children, in Farro one day, dipping in the oil. They grabbed their mums, saying, ‘I want this, I want this’. Two children in one day. We have converted a few people with this oil.” Having purchased his brother’s share, Montes now runs the business with his wife Emily (with whom he is pictured opposite) and two employees, and over time they have come to cover almost the entire pantry. Wandering around the small shop, Montes explains the different foods and where they come from. Some of the products might appear Turkish but in fact they hail from northern Greece, like the baklava, halva and Turkish delight (loukoumi in Greek). The best oils, on the other hand, come from southern Greece. “There are differences that people don’t understand because they think of Greece as a whole. But it’s diverse.” The strong and pungent Greek oregano, still on stems, is popular, as is the wide array of olives and cheeses. The olives and olive oils carry a label of origin indicating they come from Kalamata, and Montes points out the small red symbol on some of the feta, signifying it falls under “protected destination of origin”. This means the feta is authentic, made with the right milks. “Everybody thinks that it’s only goat’s [milk]. The traditional recipe for feta has to be sheep and goat. At least 70 per cent sheep.” There are other cheeses too, with different blends of milks, such as graviera kritis, a Cretan gruyere, and the salty hard cheese kefalotyri. Then there are the wines – varieties of retsina included – that come with their own stories. There’s Nemean red wine, which appears in the myths surrounding Hercules, as well as several wines made of ancient varietals like mavrodaphne from the Peloponnese or assyrtiko from Santorini. Next to the cheeses are stacks of frozen pastries imported from Greece. Montes travels each year to find products, and the pastries are a relatively new addition. “The pastry industry in Greece is enormous; there are not too many people now who do their own. All the coffee shops… it’s all from frozen. You wouldn’t know the difference,” he says. “I would never import something I didn’t want to eat in my house. We’re doing quality.” Of his business’ journey, Montes says, “Taking time, we had to adjust. It wasn’t easy and it didn’t happen overnight. We had to start fresh. I took time, a lot of mistakes, but if you don’t risk, you don’t do anything.” As for the future, Montes is open to the idea of a setting up a cafe. tastegreece.co.nz