A FALCON CATCHES A FISH 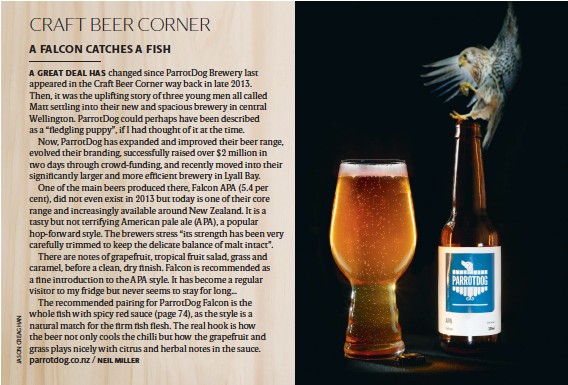 A GREAT DEAL HAS changed since ParrotDog Brewery last appeared in the Craft Beer Corner way back in late 2013. Then, it was the uplifting story of three young men all called Matt settling into their new and spacious brewery in central Wellington. ParrotDog could perhaps have been described as a “fledgling puppy”, if I had thought of it at the time. Now, ParrotDog has expanded and improved their beer range, evolved their branding, successfully raised over $2 million in two days through crowd-funding, and recently moved into their significantly larger and more efficient brewery in Lyall Bay. One of the main beers produced there, Falcon APA (5.4 per cent), did not even exist in 2013 but today is one of their core range and increasingly available around New Zealand. It is a tasty but not terrifying American pale ale (APA), a popular hop-forward style. The brewers stress “its strength has been very carefully trimmed to keep the delicate balance of malt intact”. There are notes of grapefruit, tropical fruit salad, grass and caramel, before a clean, dry finish. Falcon is recommended as a fine introduction to the APA style. It has become a regular visitor to my fridge but never seems to stay for long... The recommended pairing for ParrotDog Falcon is the whole fish with spicy red sauce (page 74), as the style is a natural match for the firm fish flesh. The real hook is how the beer not only cools the chilli but how the grapefruit and grass plays nicely with citrus and herbal notes in the sauce. parrotdog.co.nz /